Do’s and Dont’s of QR Codes

With the increasing use of QR codes, it is important to understand how to use this new tool in various settings.

Though patterns in QR codes can be altered, misplacing the QR code can make it unreadable.  Creating a QR code incorrectly will not only return an error, but also frustrate the customer, which is not good for a company’s brand.  QR codes should be used intelligently as part of a larger marketing plan, and not just because everyone is using them.

Here are a few pointers to help make the most out of your QR code campaigns:

Use easy-to-read QR codes: Larger QR codes ensure the pattern is clear and easily readable by the scanning device. QR codes that are too small or obscure make it more difficult for the scanner to read. If a QR code is being included in a print ad, make sure the code is clear and make sure you test scan the code on multiple scanners before launching a campaign. Click here to generate a free QR code.

Personalize QR codes: QR codes that are customized with a company logo tell customers where the code is coming from. In fact, if it is a recognizable brand, consumers are more likely to scan the code. Click here to see how to customize or include a logo in a QR code.

Innovate with QR codes: Various marketing companies are exploring innovative ways to use QR codes. Finding new ways to use QR codes in promotional campaigns will make them more interactive and engaging for customers. It is essential that the message in the QR code is interesting and useful.

Don’t use QR codes as marketing gimmick: If there is nothing substantial to support QR codes, the campaign will fail. When a company produces a QR code, it expects customers to respond. However, if the QR code is just there because competing advertisements have them, then it will not help the campaign.

Don’t alter the permanent areas: No matter how much information it may have or how cool it looks, a QR code will become unreadable if certain aspects of it are altered beyond the limits of the built-in error correction. There are permanent areas, such as the white and black squares at the corners and a binary line connecting those squares that should not be altered. Changing those areas may make the QR code unreadable. See this Wikipedia article on QR Code design.

Don’t place the QR code on an irregular surface: The code needs to be printed on a flat surface for an application to read the code and extract information. Try to place QR codes on vertical surfaces, so it is easier to hold the phone parallel to the code and scan.

Download our free eBook The Complete Guide to QR Codes. Just enter your email address below to get the pdf download link. 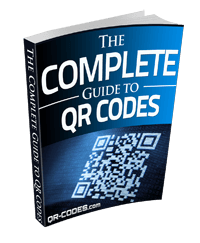 Download our free eBook The Complete Guide to QR Codes.
Just enter your email address below to get the pdf download link.